So I went to call a mate the other day (it seems appropiate to start the sentence with “so”, my apologies if this sounds offensive) but when my mate answered, he had a British accent. I was kinda confused but thought he was just being stupid so went along with it. But after a while I thought it sounded oddly like another friend of mine Matt. While he continued to talk, I glanced at my phone. I had called Matt instead. I must have sounded less confused and dazed then and continued to talk. He asked me why I called and I casually said, “Just to see how you were!” He thought that was sweet, and by the time I had hung up the phone, we had coffee plans for a few nights later to catchup. I dont drink coffee but you know, its what you call a casual catchup with a friend. If I said “Chai Latte” plans, it would make me sound like a wanker plus one. But then I just said it. Plus one. 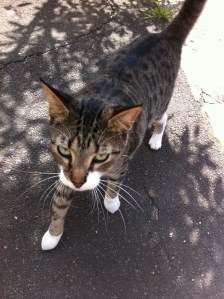 This is a cat, I called him/her Lois. He/she stands outside our front door a lot and is always up for a bit of belly rubbing love.

It is getting quite intense at work of late. Coming up to Christmas peak time.. and the cogs are very much working overtime to get everything ready. It really is the most fun and most flatout experience, but also quite taxing on the body and mind. My gym and healthy eating really has balanced this out though. But is 7 times a week too much? I dont do weights everyday, 3 of them are cardio days, but I really find it relaxing now. Addictive… I have turned.

I fly to USA next week. I have my holiday planned and book flights in the next few days. Surreal to do last minute plans and holidays as it never sinks in, then you are on a plane, alone, and hurtling your way to the other side of the world for an adventure. Anything can happen! I could trip over a park bench in a street in Richmond, Virginia, or see a check out chick in Washington DC not scan BOTH the chocolate bars I was buying to sample the ones I had never tried. Freebie. It should be a good time and I will get to see some good friends, especially Phil, who I havent seen since mid 2008. Awesome 🙂 And also Tigh, will be excellent.

This is my favourite song right now. Something about the feeling like you can jump down the street, waving casually.