To be fit or to not bother.

I reckon you should only ever get fit, for your own personal want. Not to impress, as having this as your only goal will always make you feel down because it will never be good enough. To accept that whoever ends up liking you will like you for who you are, is actually a true reality. Looking after yourself in mind and body for yourself is what is best. Wow talk about a self help blog intro.. delete, delete.

Spent the morning down south Sydney at Cronulla, had a breakfast for my sister’s 21st with siblings and my Mum. The dynamics are always interesting, with the last 5 years causing a lot of different tensions and resolutions and resettling of how u
s kids interact with our mum. Its like foreign land mixed with familiar soil. I had a bacon and egg roll, and a strawberry smoothie. I swear they taste the same as strawberry milkshakes but throughout the cafe years, it is engrained in us that smoothie means “healthier”. Must have been feeling healthy with my bacon and egg roll.
Sunday today, quiet weekend and I decided I would shout myself a movie. This means I would buy a movie ticket for myself (not like every other movie ticket is bought by someone else or magic fairies) but more, I am going alone. I have no issue with this, as who talks through a film anyways. Is it the insecurity feeling of people wondering what I am d
oing there alone? Hm but at least noone judges you for putting Maltesers in popcorn.
My brother Craig has signed himself and me up as a team in an adventure race, held in the Royal National Park in May. This is TOTALLY out of character for me to say yes to. But because it is TOTALLY our of character for me to say yes to, I said yes. So
we have 4 months of training with kayaks, mountain bikes and running, for an adventure race. Thinking about it, its an excuse to keep diligently
exercising (the word diligent is only ever used in school report cards so am dropping it in for flair) and also an excuse to see
my brother at least once a week. Forced bonding time and stuff. So it should be fun! Lets learn how to… kayak! Then compete as kayakers from the seven seas, in 4 months. So let it
begin.
This is me looking ready. 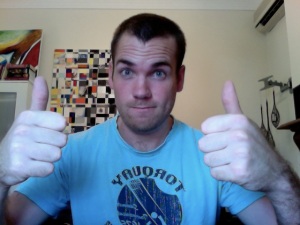