What would you do..

So Melbourne was a great time. It felt like I was back in Sydney before I realised I was in Melbourne though. Pretty short trip! Though got a chance to catch up with my Uncle Phil, who is only 12 years older than me, so he is more like a big brother/cousin. He is going through a bit of a rough time, so we just had a few or a lot of beers and chatted. Above picture, spot me and my uncle on screen 🙂

Also saw Neal, and caught up with him. Was his birthday and so went to dinner and then spontaneously saw Mary Poppins, the musical. That was pretty alright. Oh, also bought some jeans.

This week has been quite flatout, as my boss was on The Secret Millionaire on Monday night, so there was a lot of emails and feedback for the rest of the week. People asking for help but mostly just people thanking him for such a heart felt episode.

I got a text on Tuesday from Neal asking me if I would meet up on Friday with him and his new partner and have drinks with them as they would be in town. For me, hanging with Neal (who is my ex if you are not aware), is fine. Though I am sure people would agree that hanging with your ex and his new partner.. is slightly odd. What would Lloyd do here?

Well I ended up going. Somehow it wasnt too bad at all. Seeing Neal with his new fella, actually was like the last piece of closure. To see him happy and caring about this guy, and they were both kinda goofy and sweet together. So yeah was actually good for me. Crazy huh!

I am concluding there is always a catch with people. There is never a simple concept out there. I have a few perfect examples recently. Of the hot/cold variety and the “I am not over my ex” variety. At the end of the day, they are to blame but not, for their confusion. When you get to know a guy, you start seeing the cracks.. and the peices that just dont make sense. One fella Andy, was over the top mushy and then the next moment, distant and fidgety. Then got annoyed when we were acting like a couple and didnt want a relationship. Relationships dont just happen overnight and it was never what I was suggesting. (Just ignore this paragraph, its just a vent). Next fella, was honest and said from pretty much day one that he wasnt over his ex. I shrugged this off simply cause I was getting to know him. Nah, if someone says that, leave then and there. Otherwise you are in for another confusing rollercoaster. Distance, past hurt, religious hangups… the list goes on. What hangup to I have? I have to have more than one at least, cause hey, saying all others have them and I dont.. is a tad hypocritical.

Maybe mine is blaming the past as an issue, when I really just hide it amongst a real reason of not wanting to commit. But.. we all do that sometimes. I would commit if it was the right person.

The cat next door meets me at the top of the street and walks down the road a bit with me, then rolls on his/her back (havent decided if its name is Pam or Robert yet) and requests I pat its belly. So I do, then keep walking, it runs down a bit futher, sets itself up again waiting for me to catch up and belly rub time again. Somehow it has convinced me cats arent too bad.

Spring is here. And Jasmine flowers on a fence, walking through an alleyway near home really sums it up, with bright blue sky in the background. 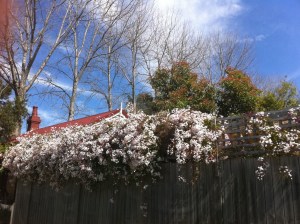