Coles Corn Flakes, they are just as nice as Kellogs. I have found this out as I became the grandma to look at the junk mail Coles Catalogue and circle the bargains I would love. I also found out that I can get Nescafe coffee for $3 (its a dollar dazzler!) Oh where has my time gone?

I have been walking to work and it is such a good walk because I pretty much only have parks to walk to between my house and work. So I get to see some interesting sites, and I dont just mean the “hey that flower is pretty wow huh… “. I dont talk like that just so you know. Last night at about 10pm I walked past a dark figure crouching on the ground, as I got closer, not intentionally as dark figures are not the type you wish to approach, but the path went that way. I am a sheep, what can I say. The dark figure turned out to be a middle aged fat man, pouring sloppy bread that was all mashed up, into containers and talking to himself. I then saw about 8 possums all around him, licking his hands and some had their heads in the slop. “Hey Mary, where is Delilah tonight? Sammy, you dont be too greedy!” I kept walking, looked back once and then continued on my way. I thought, hey to this guy, that makes his day. It also answered a question I had last week, when I walked past the same spot and some sort of stick contraption was holding the underside of a makeshift fence (built for an exhibition in the park that week) that left a gap under the fence, and a bowl of white slop. The possum man had made sure his possums could still access their version of corn flakes. Even maybe Coles ones.

I have been here over two months now, starting to feel like home. But I do miss my family, more than I thought. So I buzz them often and they seem a bit surprised I have called as much. Not that I do not want to be here, but just having a stage in life where I do like having them around. Odd huh.

I stood behind an older lady (I dont say old as it is offensive apparently. Because they will keep getting older and older and there is no maximum “old”) and she was at the ATM (Cash Machine). I was not paying attention for a while, as you do not really do that while waiting in a queue for the ATM, plus I was skipping through my iPod working out what songs were actually good, and why there was so much shit in a row on random on it. Adam Ant?? I dont even know who he is! So the woman began to take a little while, and so began to observe. After a bit I realised what the problem was. She was staring at the screen at the “Enter your pin” stage. She went to touch the pad to type in a number (dont worry I couldn’t see the pac, and was not planning on robbing Doris) and then pulled her hand away again with hesitation. She had forgotten her pin and looked so perplexed. After a while she took the card out and looked around and wondered off and sat on a bench. She looked gutted and confused.

My snails suck. I call them mine now, as they pretty much live in my letterbox permanently and so living in my space and technically pets, but can you have unwanted pets? Yeah, cause I had a Dalmatian Todd who I really pushed the unwanted vibe at. My Credit Card and Electricity bill are half eaten, so really, did I even get the bill? Excuse like the dog ate my homework, but this time, snails ate my bill so dont have to pay? Sort of yeah.

A mate of mine and me were walking along a street near his house and we walked past an OLDER couple (still being politically correct, but also, the lady wasnt old old) they stopped us and asked my friend if he had lost a USB stick. Yes, he had. The lady was looking elsewhere a lot, and said “we didnt look at what was on it, we didnt. But found a file with your name and address so we could work out who owned it and return it.” She looked sus. My friend said thanks very much and they said they would put it in his letterbox (snails better not bloody know how to eat USB sticks. The dickheads) We kept walking and I thought about why that lady made no eye contact. We concluded he must have porn on the USB stick. Oh Cherie just thought she was looking for a document with an address and found much much more.

Hm what photo do I put up with this blog entry.. I have a random shot of a toy lemur and a guy on a ladder installing part of the exhibition. Oh wait, a possum from the park. 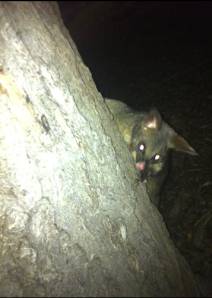