Easter as we all know, arrived and disappeared again. We all may not know I that I am a sweet tooth and my fella was quite adamant that I gotta cut down on the sweets for Easter. So I had concluded like last year he wasn’t gonna get me an Easter egg.

So I was surprised when I woke up and I had the below. 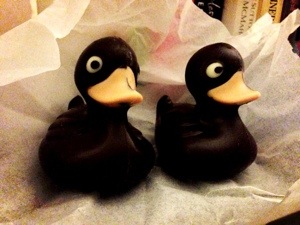 They were dark chocolate and so “healthy”. The only catch was.. They immediately had names and personalities in my head. So they couldn’t be eaten. He should have seen that coming…

So I spent the Easter long weekend with them on the shelf. Happily looking on and having a good old duck time.

About a week later… Their good old duck time was over… As the shops were far and dinner was near and it was easier to sample the duck in front of me. Erasing their names in my head I are them… It was easier than I thought.

Several weeks later (yes this highlights the fact I haven’t written in a while), my fella opens the tub they originally were stored in to find the below:

He said it reminded him of the finale of the movie “Seven”. Whatever that means. I can’t recall why I left the head of one. Whether it was the admiration of the ornate characterisation that went into the making of the duck, or I simply was too appalled at myself for eating two ducks for dinner, and leaving the head of one if them meant it wasn’t two ENTIRE ducks.

On another note, I have gotten in the habit so much, as you may relate to… In saying “I love you” at the end of a call with my partner. Which I am sure most people do. And there is never too many times you can say that, just never want to lose it’s meaning.

Though a small fear has arose and almost has become a reality. My sub-conscious has told itself that I should say this at the end of every phone call. Whether it is my partner or not. So many many times at the end of a call, for example to a client at work, I have almost finished off our discussion about marketing by informing them I loved them. This story isn’t amusing, since it hasn’t actually happened YET. I have managed to fight off the instinct. But worry I will either say half of it then trail off… or the entire thing, leaving the other person unsure of what to say. Thanks brain.